Chichén Itzá is located to the east of Yucatán, on the highway to Cancun, 120 km. Mérida Considered one of the seven new wonders of the modern world in 2007 and is a world heritage site decreed by UNESCO in 1988

The new seven wonders of the modern world are called the monuments that were the winners in a public and international competition held in 2007, inspired by the list of the seven wonders of the ancient world and carried out by a private company called New Open World Corporation. More than one hundred million votes, through the Internet and SMS, resulted in this new classification. The initiative came from the Swiss businessman Bernard Weber, founder of the company.

This is how we mentioned previously, Chichen Itzá was declared one of those seven new wonders in 2007.

The legendary Mayan city of Chichén Itzá, stood out as the cultural and political center of the old Mayan civilization and was one of the most extensive settlements in the north-central part of the Yucatan Peninsula. It was the most powerful city in the Yucatan Peninsula.
The Itzáes settled in Chichén Itzá in the 9th century AD. It is believed that they were Putun or Chontal Mayans. They forged a vast domain with a unified culture whose center was Chichen Itza. By the end of the 10th century, the city was invaded by a predominantly warlike tribe: the Toltecs. This last invasion brought with it a new series of cultural elements, the representation of the serpent-god Kukulkán standing out. Around 1250 AD, the city was abandoned for reasons not entirely determined. So great was the power of this city that centuries after its decline it was still a site of pilgrimage and worship, and even around 1540 AD. Francisco de Montejo, founder of Mérida, thought to build the capital there.
Chichén Itzá reached 25 km2. The religious, cultural and administrative center covered about 6 km2; a short distance from where  the elite lived, in palace-like buildings, carefully decorated and painted in bright colors. Around these, in green fields, between 50,000 and 100,000 people lived in palm-roofed palapas.

The Sacred Cenote was the heart of religious activities, not only of the city of Chichén Itzá but of the entire Mayan area. It was a reason for worshiping the rain god, Chaac, from the Late Classic period in 650 AD. and continued until the end of the Postclassic, in 1350 AD. Objects of gold, jade, copper, cloth, and basketwork have been extracted from its muddy bottom, apparently thrown as ceremonial offerings.
The Sacred Cenote is almost circular, with an average of 60 meters. diameter. The surface of the water is 22 meters away. from the upper shore and has little more than 13 meters. deep in the central part, where the bottom is muddy for about 4 meters. plus. It contains a volume of water of approximately 23,000 meters. cubic.
at the older section of Chichen itza, the area near the Sacred Cenote, there are buildings of typical Mayan architecture, without a mixture of foreign influences, such as the temples of the Four Lintels, the Three Lintels and the Lintel. 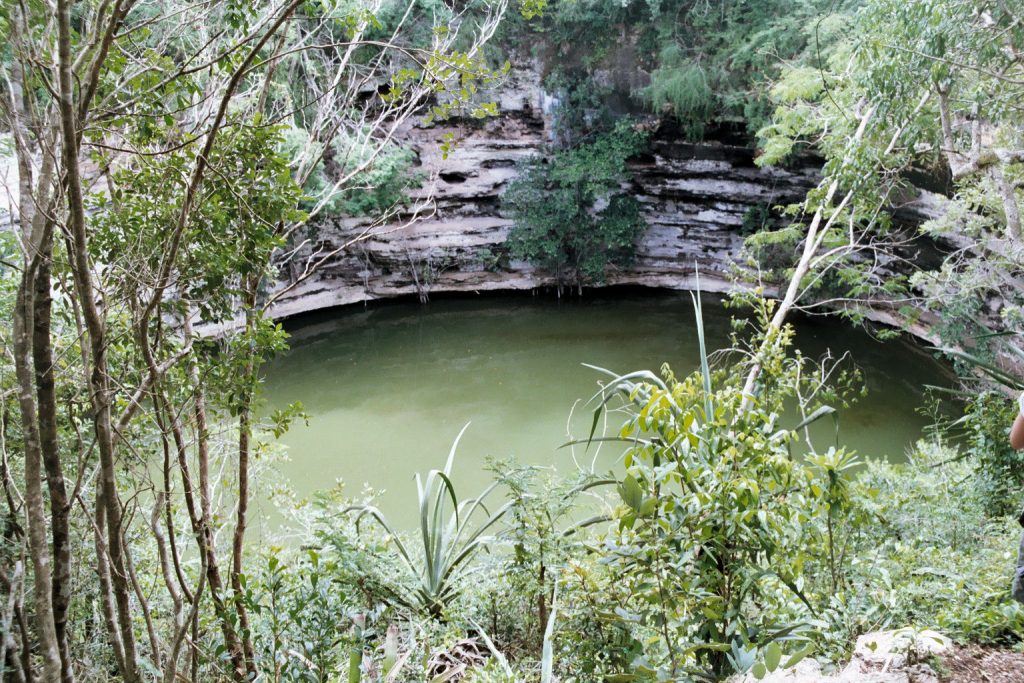 Las Monjas is a series of overlapping structures that belong to the area usually designated as Chichén Nueva, but their characters date back to the ancient stage of the city’s flourishing.
Viewed from the Caracol the modern city, the great pyramid of the Castle, the quadrangle groups of the Patio de las Mil Columnas, the arrogant Temple of the Warriors (which encloses the Temple of Chac Mool inside), the whole of structures of the great Ball Court, and other minor constructions such as the Temple of the Tables, the so-called Osario or Tomb of the High Priest, the Mausoleum and the Temple of the Eagles.
The whole of the Caracol consists, in essence, of three parts: the Tower itself, a circular building, and two platforms or terraces in rectangles, superimposed, the lower one of course larger in dimensions, and from which the round structure rises, with internal spiral staircase, a circumstance to which it owes its name.
The Castle of Kukulkán “The Feathered Serpent”, measures 60 meters per side, at the base. It rises in nine decreasing bodies to the height of 24, thus reaching the month that supports the temple, and it raises its walls eight meters more. Each façade or front of the pyramid-shaped mass boasts a wide staircase made up of 91 stone steps, a set that makes up 364 steps, and added the earth, or the upper platform, 365. The stairs of the Castle, at ground level, are topped off by colossal sculptural heads, like a serpent.

In 1930, thanks to the Mexican archaeological work carried out on the Castle, the existence of an internal pyramidal building was confirmed, with a staircase only on the northern side. Like the exterior, it consists of a pyramid base and a sanctuary seated above. Like the external pyramid, the interior one consists of nine decreasing bodies, and houses an impressive statue of Chac Mool. Her eyes, teeth and nails are made of bone, cleverly applied to stone. It kept the splendid sculpture of a monolithic tiger, painted in a dazzling red color. It has open jaws, and the eyes are a pair of round jade plates.
The set of structures of the great Ball Court, oriented from North to South, and located towards the north of the Castle, is made up of five main structures: the Ball Court itself, the Temple of the Bearded Man, the South Tribune, the Temple de los Tigres and the eastern Annex of this building.
The Ball Court essentially consists of two longitudinal and parallel blocks, which leave a free space for the game. They measure around 90 meters long, with a transversal space of around 30. Such massifs offer an extremely wide grandstand on the outside, which provides access to the platform of the massifs, a probable terrace intended for spectators; internally, the massifs offer a vertical wall that reaches the ground. Near the base are attached horizontal deck benches and sloping side, which confines to the ground. Nestled in these straight interior walls, at a certain height, near the edge of the upper terrace, were the discs carved with figures of snakes in link, on which the maximum interest of the game was concentrated. One of the rings is preserved.
The solar equinox, an archaeo-astronomical phenomenon, is the moment when the earth is illuminated by the sun in the same way in the northern and southern hemispheres. At dusk on March 21 and September 22, days of the beginning of the spring and autumn equinoxes respectively, a solar projection is observed on the north staircase of the Pyramid of Kukulkán, consisting of seven triangles of light, inverted, as a result of the shadow cast by the nine platforms of that building, at sunset, which creates the appearance of a snake that gradually descends one of the stairs to the head, located at the bottom of the pyramid, until the iconic feathered serpent. The process from its beginning to its completion lasts approximately 45 minutes.
Another phenomenon that is observed in the Mayan pyramid is the lunar equinox that happens during the early morning of the full moon, in which the visual game of the triangles of 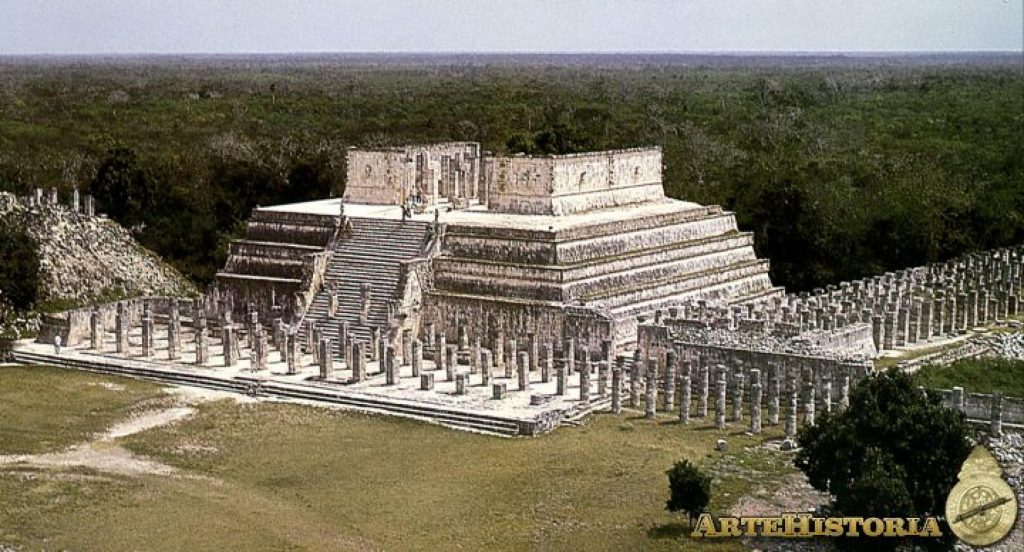 shadow on the staircase of the El Castillo pyramid, which simulates the descent of the feathered serpent.
During the dawn of June 20, 21 and 22, the summer solstice takes place, this spectacular phenomenon causes the light to illuminate only the north and east faces of the pyramid, while the south and west faces remain in shadow. . In winter, the reverse occurs, that is, the illuminated part darkens and the dark part lights up, in addition to not happening at dawn, but at dusk from December 20 to 22.